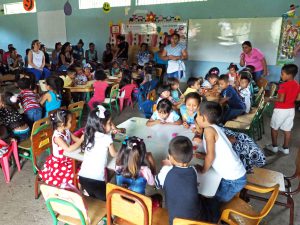 This program was the  brainchild of Dr Donald Kaminsky, Tegucigalpa Rotarian and founder of AyO.  The program originated in 2014 when 200 caregivers and 200 children ages 0 to 5 years from the small community of La Cuesta, just outside of Tegucigalpa, were provided with health care treatment, disease prevention and assessment of language, motor skills, cognitive abilities and social interaction skills. It was funded by Kelowna  Rotary clubs and the Rotary Foundation. 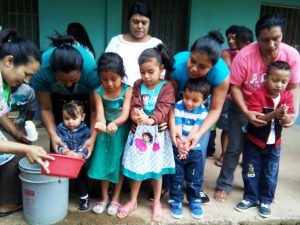 The program ran for 1 year, and  caregivers were taught how to stimulate their children through play activities with other children, the proper development they should expect for their children, how to cook nutritional healthy foods, and how to prevent disease.  The children’s health and development were assessed.  De-worming and vitamin/nutritional supplementation were provided where warranted.    The children in this photo are being taught about proper hand-washing.

The child to the left is shown with a nutritional supplement that will aid his growth and development.

20 of the 200 caregivers were selected for extra training as Mother Leaders.

Over the years, this program has continued, receiving funding from Canadian and US Rotary Clubs and the Rotary Foundation.  A total of 550 children and their caregivers participated in the program and 55 Mother Leaders have been trained.   Many more have benefited as most families have more than 1 child, and women have shared their knowledge with family and friends.  The programming was expanded to address domestic violence  and women’s health and reproductive rights.

These statistics show the remarkable improvement for the 150 children enrolled in the program in 2018.

After a hiatus in the Early Childhood Stimulation Program, partially due to Covid 19, a new program for 75 Caregivers and their 80 children under the age of 5 is being offered in a new community located about 13 kilometers from the centre of Tegucigalpa called, “Nueva Capital”.  This latest program is funded by Rotary Clubs from the Thompson Okanagan region of BC, Rotary District 5060 and The Rotary Foundation.  Twelve of the Caregivers in the program are receiving training as Mother Leaders in Early Childhood Stimulation and four of the Mother Leaders from the previous La Cuesta training programs are assisting with the new program being offered in Nueva Capital.  This program commenced in July 2021 and will run for 12 months ending in July 2022.