Each year in January, a team of HELP Honduras members travel to Honduras to meet with our partners at  Alternativas y Oportunidades (AyO) and the Rotary Clubs of Tegucigalpa and Santa Barbara.    We review the activities of the previous year and make plans for the next. 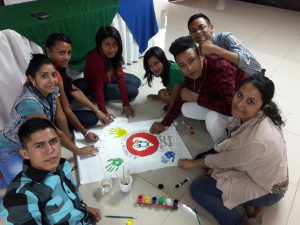 We spend three or four days photographing the over 400 children that  our sponsors support in school through HELP Honduras .  We get thousands of hugs, smiles and thank-you’s from the kids and their families.

The HELP Honduras Directors are a dedicated bunch.  They donate  their time and travel at their own expense to do the annual inspection tour.

Details of the 2017 inspection tour are below.

Michael Balahura, Sharon Docksteader, and Heather More arrived in Tegucigalpa and were met by Dr. Don Kaminsky, board member of AYO and member of the Tegucigalpa Rotary Club

We discussed what seemed to be a major shortfall of donations this year, which required cutting students from the scholarship program. The following criteria were used to to award scholarships.
1. All students in their final year of school were kept on the program.
2. Students from the poorest families were given priority.
3. Students and families must be engaged in the weekly meetings that AYO holds.
4. Parents who participated in the Economic Opportunity Training Program would be expected to support their families.

The group toured AYO offices and met briefly with Norma, Oscar, Lurvin, and Alexander in preparation for the week’s activities.

Heather spent the day with Lurvin, updating the HH database to reflect students leaving the program and updating the AYO database with new sponsorship information.

In the evening Don, Michael, Sharon and Heather met to discuss the new Agency Agreement.

Traveled to Oronojo with Wendy, Chair of the AYO Board and Armando, director of AYO. Both are members of the Villa Real Rotary Club.

Took photos of the children of Las Americas market at Francisca Reyes School along with all AYO staff members – right from security guard to the doctor. AYO staff use the picture taking process as an opportunity to interview all the clients on their current situation (questionnaire attached).

Took photos of the children from San Isidro and Zonal Belen.

Took photos of the children from Villa Union, El Guanabona and Campo Cielo

Attended the Tegucigalpa Rotary Club meeting where Don K and Mike put on a short presentation. Ron Ross was remembered with a plague and Mike, Heather and Sharon were honoured with certificates.

Traveled to La Cuesta to photograph children. We were supported by members of the Villa Real Rotary Club, Wendy, Armando, JJ, Liliana, Carla While the HH team was taking photos, Maureen Duncan, Chris Dysart and Alan Marcus from Victoria Rotary Club interviewed women who had participated in the EOT program which was sponsored through a GG.

The Early Stimulation program, supported by Global Grants through Kelowna Sunrise and Kelowna Ogopogo Clubs showed us their activities done with mothers and children.

The women of the market did a short presentation honouring Ron Ross.

Attended the Villa Real Rotary Club meeting where Mike made a presentation to the group.

Spent the day at AYO offices where we finished the last of the photos and joined Maureen Duncan, Chris Dysart and Alan Marcus from Victoria Rotary Club in interviewing youth who received Job Search Training through a Rotarian Global Grant.

Mike, Heather, Sharon, Chris, Maureen, and Alan met with AYO staff – Freddy, Alexander, Lurvin and the Doctora, AYO board members Don Kaminsky, Wendy McCormick for a review and planning session for the GG and for HH programs. These reports are available separately.

The team visited the Santa Barbara Technical Institute, the site of many projects sponsored both by Rotary, Interact and HH over the last 10 years.

The team visited the village of Sorca, located high in the mountains about 40 kms (1 hour) from Santa Barbara. The village of 60 families is requesting assistance in replacing their kindergarten building that collapsed. The kinder class of about 20 is currently housed in the school kitchen. There is an obvious need for more water and better bathrooms. The village leaders agreed that they would perform all the unskilled labour. They will meet to draft a budget and to come up with a solution for better water supply.

The team visited the site of GG. The men from the village were hard at work digging the trench and laying the pipe. There were 40 men at work. Each of the 300 men from the village will work once a week until the unskilled labour portion of the project is complete – 2 or 3 months. The women bring lunch. We walked up to the water source, which was clean and well protected.

In the afternoon we visited the site of the current water tank and the new water tank.

We delivered musical instruments to the Music School at Trinidad visited Delicias and Corazal to see the schools which were sites of previous HH projects , meet with the women who received EOT training through a GG and deliver school supplies to their children. We visited a third school that received GG support but no HH support to meet women and deliver school supplies.

We attended a farewell party at the home of Juan ????

We visited Santa Barbara Public Hospital to confirm the delivery of 4 medical kits and to deliver baby clothes and diapers . Our meeting there was filmed by the local television station and was broadcast across the country. We then traveled to Intibucá where we attended the Intibucá Rotary Club meeting.

We attended the inauguration of a school at Azacualpa de Yamaranguila which consists of two classrooms with bathrooms, desks, 2 computers, and solar panels (the community does not have electricity). The school is well built using better than average material. It isn’t quite competed yet because the area has a very difficult climate (lots of rain) Gwen Telling and John and Jean Edge Partington, the major donors received special honours. The community presented a plaque to HELP Honduras which was received by Rene Vasquez, our agent there. We left the plaque with him because it was very heavy and because he deserved it. Rene V, Marley C and Álvaro traveled to Intibucá many times over the past year – 4 hours each way, some of it on difficult roads, without pay, to ensure that the building was built to our standards.

The team was presented with proposals for possible future projects in the area.

This site uses Akismet to reduce spam. Learn how your comment data is processed.